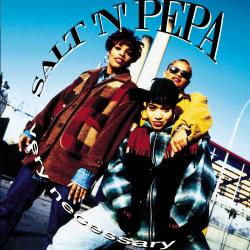 I want to take a minute or two, and give much respect to -
To the man's that's made a difference in my world.
And although most men are hoes, he goes on the down-low
'cause i never heard about him with another girl.
But i don't sweat it because it's just pathetic to let it,
Get me involved in that he said she said crowd.
I know that ain't nobody perfect, i give props to those who deserve it,
And believe me ya'll he's worth it.
So here's to the future 'cause we got through the past,
I finally found somebody who can make me laugh. (ha ha ha)
You so crazy...i think i want to have yo baby.

My man is smooth like barry, and his voice got bass.
A body like arnold with a denzel face. he's smart like a doctor
With a real good rep, and when he comes home, he's relaxed with pep.
He always got a gift for me everytime i see him.
a lot of snot nose, ex-flames couldn't be him.
He never ran a corny line once to me yet, so i give him stuff
That he'll never forget. he keeps me on cloud 9 just like intended.
He's not a fake wannabe, tryin' to be a pimp. he dresses like a
Davadon, but even in jeans, he's a god sent original,
The man of my jeans.

Yes my man says he loves me, never says he loves me not. not to
Rush me good and touch me in the right spot.
See other guys that i've had, they've tried to play all the mac,
But everytime they tried, i've said \"that's not it!\"
But not this man, he's got the right potion, baby rub it down
And make it smooth like lotion. he's the original highway to
Heaven. from seven to seven he's got me open like 7 eleven, and
Yes it's me that he's always choosin. with him i'm never loosin,
And he knows that my name is not susan. he always has heavy
Conversation for the mind, whuch means a lot to to me 'cause good men
Are hard to find.

My man gives real lovin, that's why i call him killa. he's not a
Wam bam, thank-you-ma'am, he's a thrilla. he takes his time,
And does everything right. knocks me out with one shot for
The rest of the night. he's a real smooth brotha, never in a
Rush. and he gives me goose pimples with every single touch, spends
Quality time with his kids when he can. secure in his manhood
'cause he's a real man. a lover, and a fighter, and he'll knock
Another out. don't take him for a sucka, 'cause it's not what he's
About. everytime i need him, he always got my back. never dis-
Respectful, 'cause his momma taught him that.