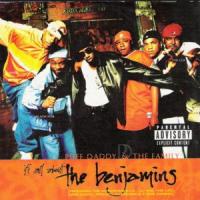 It's All About The Benjamins Letra y Canción

'It's All About The Benjamins'

Uhh, uh-huh, yeah
Uhh, uh-huh, yeah
It's all about the Benjamins
baby
Uhh, uh-huh, yeah
It's all about the Benjamins
baby
Goodfellas, uhh
Verse One: Puff Daddy
Now... what y'all wanna do?
Wanna be ballers? Shot-callers?
Brawlers -- who be dippin in the Benz wit the spoilers
On the low from the Jake in the Taurus
Tryin to get my hands on some Grants like Horace
Yeah livin the raw deal, three course meals
Spaghetti, fettucini, and veal
But still, everything's real in the field
And what you can't have now, leave in your will
But don't knock me for tryin to bury
seven zeros, over in Rio Dijanery
Ain't nobody's hero, but I wanna be heard
on your Hot 9-7 everyday, that's my word
Swimmin in women wit they own condominiums
Five plus Fives, who drive Millineums
It's all about the Benjamins, what?
I get a fifty pound bag of ooh for the mutts
Five carats on my hands wit the cuts
And swim in European figures
F*** bein a broke ni***
Verse Two: Jadakiss (overlaps last two lines of Puff Daddy)
I want a all chromed out wit the clutch, ni***
Drinkin malt liquor, drivin a Bro' Vega
I'm wit Mo' sippers, watched by gold diggers (uhh)
Rockin Bejor denims, wit gold zippers (c'mon)
Lost your touch we kept ours, poppin Cristals
Freakin the three-quarter reptiles (ahahah)
Enormous cream, forrest green -- Benz jeep
for my team so while you sleep I'ma scheme (that's right)
We see through, that's why nobody never gon' believe you
You should do what we do, stack chips like *Hebrews*
Don't let the melody intrigue you (uh-uh)
Cause I leave you, I'm only here
for that green paper with the eagle
Verse Three: Sheek
I'm strictly tryin to cop those, colossal sized Picasso's
And have papi flip coke outside Delgado's (whoo!)
Mienda, with cash flowin like Sosa
And the latin chick tranportin in the chocha
Stampedin over, pop Mo's, never sober
Lex and Range Rovers dealin weight by Minnesota (uhh)
Avoidin NARC's wit camcorders and Chevy Novas (uh-huh)
Stash in the buildin wit this chick named Alona (uh-huh)
from Daytona, when I was young I wants to bone her (uh-huh)
But now I only hit chicks that win beauty pageants (ahahaha)
Trickin, they takin me skiing, at the Aspens (c'mon)
Uhh, gangsta mental, stay poppin Cristal
Pack a black pist-al in the Ac' Coupe that's dark brown (whoo!)
Pinky-ringin, gondolas wit the man singin
Italian music down the river wit your chick clingin
to my bizzalls, player you mad false
Actin hard when you as pu*** as RuPaul
Interlude: Puff Daddy
C'mon, c'mon, uh-huh
It's all about the Benjamins
baby
Uh-huh, yeah
(repeat 4X)
It's all about the Benjamins
baby
Now, what y'all wanna do?
It's all about the Benjamins
baby
Wanna be ballers, shot-callers
It's all about the Benjamins
baby
Brawlers -- who be dippin in the Benz wit the spoilers
It's all about the Benjamins
baby
On the low from the Jake in the Taurus
Verse Four: Lil' Kim (overlaps last two lines of interlude)
Uhh, uhh, what the blood clot?
Wanna bumble wit the Bee hahh?
BZZZZT, throw a hex on a whole family (yeah... yeah yeah)
Dressed in all black like the Oman (say what?)
Have your friends singin 'This is for my homey' (that's right)
And you know me, from makin niggaz so sick
Floss in my 6 with the Lex on the wrist
If it's Murder, you know She Wrote it (uh-huh)
German luger for your ass bitch, deep throat it
Know you wanna fill the room cause it's platinum coated
Take your pick, got a firearm you shoulda toted, suck a dick
All that bullshit you kick, playa hatin from the sideline
Get your own shit, why you ridin mine? (uh-huh)
I'm, a Goodfella kinda lady
Stash 380's and Mercedes, Puffy hold me down baby!
Only female in my crew, and I kick shit
like a ni*** do, pull tha trigga too, f*** you
(Big: Yeah, yeah, uhh, uhh, uhh!)
Verse Five: Notorious B.I.G.
I been had skills, Cristal spills
Hide bills in Brazil, about a mil to ice grill
Make it hard to figure me, liquor be, kickin me
in my asshole, uhhh, undercover, Donni Brascoe
Lent my East coast girl, the Bentley to twirl (uh-huh)
My West coast shorty, push the chrome 740
Rockin wit Redman and Naughty, all in my kitty-kat
Half a brick of yea, in the bra, where her titties at
And I'm livin that, whole life, we push weight (uh-huh)
F*** the state pen, f*** hoes at Penn State (c'mon)
Listen close it's Francis, the Praying Mantis
Attack with the Mac, my left hand spit, right hand
grip on the whip, for the smooth getaway
Playa haters get away or my lead will spray
Squeeze off til I'm empty, don't tempt me
Only, to Hell I send thee, all about the Benji's
What??
Outro: Puff Daddy
It's all about the Benjamins
baby
Uh-huh, yeah
(repeat 8X)

Puntuar It's All About The Benjamins

* Agradecemos a votasgu por haber añadido la letra 'It's All About The Benjamins' de Puff Daddy.