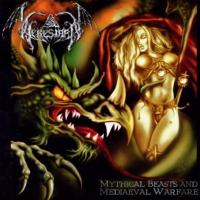 It was in the long gone days of old
When the mighty master of darkness
Hit the earth with his terrible mace
And tremendous tumults shook the soil
Amidst vast vapours of fire and dust
A great mound arose in the wastelands of north,
And there among fields of heather and moss
Began the tale of Dragon's Domain...

Within the majestic mountain of stone
The master then carved great caves beyond count
And inside the gloomy cold walls of the rock
Forth brought he the darkest design of his thought
And shaped a mighty kingdom for worms
Finally under the roofs of the hill.
Where black pitches loomed and ground belched flames.
He placed the first seeds of a Dragon's Domain.

The new devised race of horror and dread -
Like birds merged with serpents of lizards, or worms -
Soon woke from their wyrmish slumber of time
And no beasts yet greater had followed the Moon.
They hardened their flesh in the fires of the earth
And sharpened their claws on the edges of rock
And soon every tree in the wastelands was burnt
By the scorching breath of the Dragon's Domain.

Far beyond the borders they went
And sacked and brought ruin to every neighbouring realm
And the king of serpents wore a crown of their hoard
A golden-horned sign of their splendour and might
And only the bravest warriors dared
To enter the bare lands around the kingdom of snakes
And never through many a century after
Did bards forget the tale of the Dragon's Domain.

The bards forgot the tale of Dragon's Domain...