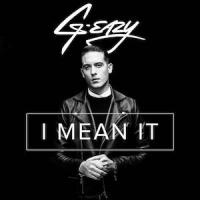 I mean it Letra

I mean it en español

[Verse 1: G-Eazy]
If I say that shit then I mean it
She calls me, I screen it, I'm only fuckin' if it's convenient
You lie on pu***, that's weak shit, we pass pu*** 'round, that's G shit
But you ain't fam so what is this "we" shit?
You cuff yours and then leash it
Listen, I'm tellin' you, it's my world, I does what I wish to
If you're mad then too bad, sounds like a personal issue
I walk in, they all stare like "Who the f*** is this dude?"
Kicks game is just rude, don't get jiu-jitsued
Tunnel visions, I get ahead, stayed solid I never fled
My haters feel like I'm better dead but I'm quite alive getting bread instead
With a better girl, with a better face, I'm in a better place gettin' better head
"I just wanna stay broke forever," yeah that's that shit no one ever said

[Verse 2: G-Eazy]
Signed Gerald, I'm sincere
This year I'm in here, I'll spell it out to make things clear
Meanwhile your end's near, I've gotta land and I'm in gear
You people wonder who's next up, that conversation really ends here
You rappers just talk a bunch, stress me out, I chop a dutch
Weak rappers tryna bite the sound, but my style is a lot to munch
I'm more like whiskey neat, and you're more like vodka punch
G’s dope, he might blow up, think I know, I've got a hunch
On my side it's authentic, you try to stunt but it's all rented
But you're dope you got a bad chick, yeah, cool bro we all get it
She wears a ring, came through without it
You really think she stay true? I doubt it
Cause I'm fuc*** your girlfriend, and there's nothing you can do about it

Valorar 'I mean it'