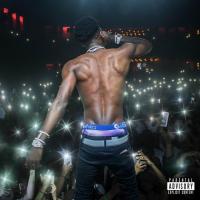 [Verse]
Smokin’ cigars fatter than a Swisher sweet
Caught him on a corner, ni*** thought he had me beat
I’m on location, I’ma die right in the streets
Shooters trailin’ on my reel wit’ a Glock on a seat

He wanna whip me see what’s up, ni*** smoke somethin’
Talkin’ like he ’bout it, you ain’t never (?) somethin’Baby Joe’d somethin’
I talk that talk, I walk that walk, You know I tote somethin’
Bitch I’m out that 8, I said it straight I’m tryna blow somethin’

Put my flex down, I’ma spray that tec round, Ben put the bet down
I’ma spin then spin again and wet their block until the sun down
In FruitTown not far from sundown, we ain’t make not one sound
Keep passin’ by their trap ain’t that bitch get burnt down’

Menace to society and I won’t stop for nobody
And what you mean you know we ’bout it, I get work with the shotty
He ran his bike in KK (?), I up that bitch and I shot him
Never be silent, we be wylin’, where I’m from they get violent

I got that money, turnt to poppin’, collected over two bodies
And I invested in this smoke so if you want it we got it
Plus I’ve been boomed up off of that molly, bitch I’m turnt up my body
I don’t give a f*** ’bout what you say, bitch you ain’t stepped on nobody

RIP boo bitch, he’d been spinnin’ on shit before they caught him
We never beef with shit to sleep, I take that name as a daughter
I started steppin’ on my one, I turned myself to a rodder
Tryin’ to knock you niggas out, bitch I done lost every dollar

I run it up and get it back, I’m tryna slatt shit, I’ll wipe his nose
Bitch I buy that food from Birdman, B ain’t never closed
Bitch I’m out that north and every ni*** wit’ me throw them thou’s
Bitch I got a problem, ask my momma, I be whoopin’ hoes

Now eat that dick up, better make you spit up before I beat it up
Don’t wanna leave more time to f***, take our clothes and make her get the f***
She say that I’m a dirty bitch and I’m wrong but I don’t give a f***
When you tryna be a part this business you can hit me up (?)

They ain’t gotta say my name, I’m a stud
He movin’ wrong, they say he tellin’ so I cannot f*** wit’ (?)
Crash the party, walk up in that bitch to get me started
My comprehenesion is distorted, ask me can I spell like (?)

He talk ’bout takin’ mine, you must not heard I slang that iron
Don’t do no blinkin’ or no duckin’ when it’s bitch I go to firin’
All behind my cousin and the bottom shot eleven times
The clip 141, I counted it, only came out to 9

Oh (me f***?) wit’ nine, what niggas say when you red it
Spin on your block with them cutters and we gon’ see who be steppin’
He say he down to ride, we’ll send that bitch up to heaven
Stay with them shots, I keep that Glock, I feel in love when I met it

Straight out that north livin’ lavish
My youngin’ never had a daddy, he’ll let a bitch have it
I have my pack inside the house, put m stick under the matress
And if a ni*** don’t mistake, not as well I call magic
(That slime shit)