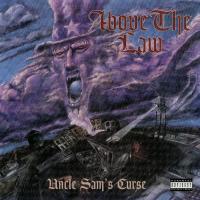 "This is Michelle Devine, coming to you live from the hoods finest, WALZ. I gotta give a shout out to my homegirl Mimi. She just broke up with her man. Hey, I always say if you can't break a ni***, then shake the ni***. This next song is goin' out to all the players. Somethin' new from Above the Law called "Concreat Jungle"."

I say what's up fool, I'm kickin' it with my partners
I'm checkin' with my homies and we movin' shit proper
I peep a mega bitch
I'm wonderin' what she thinkin'
She say 'What you lookin' at, pimp?'
I'm wonderin' what this ho was drinkin'
As she greased that ass in the place
And then the pimp clinic recognized the face
It's the same old bitch with the jack move
Real smooth, with nothin' to prove

So, here comes the 5-7 sniper
Bitches can't dance if they can't pay the piper
Tryin' to make a G like every single day
I'm sippin' on some Alizé
Rollin' in a ragtop trey, yo
A young ni*** tryin' to have it
Doin' it like I'm doin' it is an everyday habit
Do I do a lick or do I call a caper
Cause I'm like sprung of the motherfuckin' paper

Now, now
Now niggas wanna know where we get it from
We play dumb, when they ask can they get some
No, you gotta step cause you can't bring the funk
And if I gave you a chunk you'd probably skip down, punk
And run and tell your motherfuckin' bitch or two
Or your hoe
Cause you thought the clinic had no clue
Now scandalous motherfuck*** get broke to they knees
As the click run up in ya like the AIDS disease

Now I'mma get straight to the point cause I'm ill
And just like Shaq I'mma slam the pill
On the real, so chill
Cause fools be tryin' to loc up
Fuckin' around with me they only get they ass broke up
Or broke down
Cause niggas be tryin' to clown this shit
But find out that I don't play the bitch
Yo, the last ni*** tried to play me like a hoe
Got popped with my motherfuckin' .4-4, yeah

So, now you know what its like to get clipped to the other side
We rowdy, when we in the G ride
We dumpin' out the window
K-Oss blaze the indo
Suckers at the door
Nah, it's Nina Flow
Back up off me, we about to wreck shop, take shop
It's niggas on the list that might get mobbed up
So, if they don't cut with the quickness
Cause we always strappin' 9's
To help with the thickness

Cause if you're soft
You'll never ever get no fuckin' props
You're the flunky on the block
Snitchin' to the fuckin' cops
Like KM.G said, you better back up
Cause when you play the pu***, boy
You get fuc***
Cause I'm cold
Leave you ass stuck like Sub-Zero
Choke that ass out
And rip out your torso
See that's the price when you're fuckin' with the real
So take my advice and just chill

"Yeah, I told you it would be the bomb. Right now, I wanna give a shout out to everybody on the west side kickin' it, everybody on the east side doin' they thang. I got a message for Tyrone: Dede say she don't wanna be with you no more. Damn, it's a cold world. And Pam: GQ from the east side said that ain't his baby. Girl, you better check that ni***, or check yourself. Oh, Shawn: Pea just called in. She said that was fuc*** up the way you played her last night at the club. Said everything's alright, she just wanna know who that ugly bitch was you left with. Anyway, I gotta get out. The word for the day is paper. If you ain't got none, you better get some and if you don't know how you get it, you better learn."