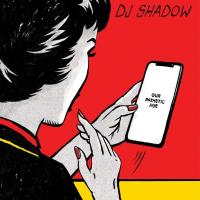 [Verse 1: El-P]
Greetings to all
Here from the edge of a wall
Upon a ledge where I'll fall
Might be the way to make sense of it all
Certainly worked for the dog
I'm talking pet of my mama's mama
Grandma mama
Jumped for his life, lost it instead
Didn't like heights, I gotta guess
Liked starving to death even less
Living room was a badly-lit mess
Only inside of the room, there's no breath
Part of me [?] I get it wrong
We never met, this is only a song
I heard a story just once with my mom
She said the bottoms you held, it ain't last very long
When you gave out no one knew that you gone
Or knew that you couldn't bring food to the dog
Damn, look at that beast
Licking, gnawing had made her cheeks utter deceased
Little white noise coming out the TV
Warming up, blowing the heat
Door to the balcony
Cracked just enough to hear honking of horns in the street
Wondering how long little Fluffy just stood there and stared
No one
Some families don't rise, they drop from the sky
Four little paws and a bark to the gods
Born from the death of a queen in New York
Mama took that but fought with those odds
Insert the blood, Fluffy just jumped
To me, he's always been a hero unsung
Mama jumped too like, "Fuck it, I'm here"
And I'ma jump too like, "Fuck it, let's go"
'Cause I don't really see no other clear road
It's just get dead or grow to get old
Really can't risk not taking that risk
Fluffy done jumped, how am I gon' ditch?
Backflip the f*** off a cliff, lil' bitch
In front of foundation, make a quick wish
RTJ, no fall from grace
Have a great day, get the bag and away, ayy

Some' 'bout the feel of this beat
Making me think of Denise, that was my mama
Also the Levy and Shonda
But we here by Betty and Lester in heaven, yeah
But right now the focus is Five-Finger Freddy
Who worked for Big Eddy who drove in a Chevy
The color spaghetti and he sold the lettuce
And lettuce is actually weed, ayy
I know you actually know 'cause
You ain't no actual ho, uh
I had to be about nine at the time
This had to be '84, so
Mama was pretty and Freddy was petty
So he played my mom like a lame
But he did not know that Denise was a beast
She flipped on his ass insane
A stick and a stab, a stick and a stab
He couldn't get ahold of her hand
A stick and a stab, a stick and a stab
My mama was whooping a man
Fuckboy Freddy wasn't ready
Playing with Denise 'bout fetti
Got left bloody and messy
Learned my lesson, and my lesson was
Be impeccable with your word
Even dope boys on the curb
You a king, say what you mean and mean yo' word
Or you might get fuc*** up
Left out leaking like Freddy on the side of a curb
With a blood-stained hand
Mama still fixed my clothes
Told me, "Stand like a man
And never fold for these hoes"
Look