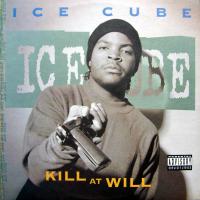 Up early in the morning dressed in black
Don't ask why? 'Cause I'm down in a suit and tie
They killed a homie that I went to school with(Damn!)
I tell ya life ain't shit to fool with
I still hear the screams of his mother
While my nigga laid dead in the gutter(Shit!)
And it's getting to my temple
Why is that the only time black folks get to ride in a limo?
It makes me so mad I want to get my sawed-in
And have some bodies hauled in
But no, I pay my respects and I'm through(what up Cube?)
Hug my crew, and maybe shed a tear or two
And I want to get blitz
Grab my 40 ounce and then I reminisce
About a brother who had to be the one and only
So I dedicate this to my dead homies

Another homie got murdered on a shakedown{three gun shots}
And his mother is at the funeral, havin' a nervous breakdown
Two shots hit him in the face when they blasted{two gun shots}
A framed picture and a closed casket
A single file line about 50 cars long
All drivin' slow with they lights on
He got a lot of flowers and a big wreath
What good is that when you're six feet deep?
I look at that shit and gotta think to myself
And thank God for my health
'Cause nobody really ever know
When it's gonna be they family on the front row
So I take everything slow, go with the flow
And shut my motherfuckin' mouth if I don't know(Word!)
'Cause that's what Pops told me
But I wish he could have said it, to my dead homies

I remember we painted our names on the wall for fun
Now it's \"Rest in Peace\" after every one
Except me, but I ain't the one to front
Seems like I'm viewin' a body after every month
Plus, I knew him when he was yea big
Pour beer on the curb before I take a swig
But somethin' ain't right
When it's a tragedy, that's the only time that the family's tight
Lovin' each other in a caring mood
There's lots of people and lots of food
They say \"Be Strong\" and you're tryin'
But how strong can you be when you see your Pops cryin'?
So that's why Ice Cube's dressed up
Because the city is so fuckin' messed up
And everybody is so phony
Take a little time, to think about your dead homies