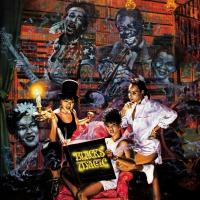 Here to let you know how the rhymes just go
When it's time to pick up the microphone
And let the voice flow
So yo Steevee O let the beat go
Whether it's fast or slow or medium tempo
No one can ever flow smooth as this
Whether he's a Mister or she's a Miss
So come one, come all, ya gotta bust a sound
Or rather the rhyme will just gather around
To see the doper than dope ones, fulfill the circumference
Go out and buy an amp so that you can pump this

It's startin' to irk me, yo, Salt, what irks you?
Other MCs couldn't fill up a circle with fans
While we were on vacation you couldn't complete your end
Salt and Pepa now we're back and again featuring
Spinderella, she's not a fella but a pro
And on the wheels of steel good to go
Cuttin' up a storm sometimes it's frightning
First comes the rain then strike the lightning
Doper than dope, can anyone cope?
Yes, a-maybe, ahh - nope, so why do you persist and try?
Look me right in the eye and tell me are you that fly?
That you can pick up the microphone
We stake the mic alone
Hope that you never run into Salt and Pepa
'cause we're doper than dope

Yo, it's been a long time, but now we're back
Salt and Pepa's gettin' funky on a brand new track
And more up-to-par, swift like a car
Stickin' to your mouth like rooftop tar
Leaving a scar on those who spar
So pass the cigar, get a drink from the bar
Lyrics gonna flood your mind like the reservoir
Here they are, come and join the Salt and Pepa seminar
The rhymes are refined, some call them bizarre
But they can catch your ears like a bass guitar
And speakin' of base, why did ya in the first place?
Walkin' around town till I see you face to face
You didn't want to speak so I rested my case
And now you're feelin' kinda fragile like an antique vase
But don't worry friends or even give up hope
'cause this time we're hyper than hype on the mic
Call us doper than dope

Three-two-one break down, ya broke up
'cause you started speakin' when you shouldn't have spoke up
You went the wrong way, you shouldn't have tried
To dis Salt and Pepa 'cause half-steppers gettin' fried
'cause these females at five minutes a beat
Is all it takes for us to take control seven days a week
You're wack, stick to your skeezin' please
And let's not waste time on the weak MCs
'cause they're unreal, and we're the real deal
'cause we reveal the real sex appeal

Yo, fellas, you want some, come and get some
Doper than dope rhymes so I can hit some
Musical notes that can hypnotize
Keep your eyes on the lips, hips, and thighs
Try to concentrate on the whole scenery
'cause this is Salt and the Pepa MC
Yo, here to rock right with the Idolmakers clan
There's Steevee-O, Hurby the Luv Bug and also
The Invincibles, Fat Doug, Dre, and Bougie
And much more so get your VCR and pick my Fuji tape
And rush for your house, don't move slow
'cause you might miss the main Idols in the video
You guessed it, yes, it's no joke
Salt and Pepa's on the mic gettin' (what?)
Gettin' doper than doper than doper than dope

Enough (Why?), 'cause this ain't your average stuff
And when it comes to rockin' rhymes Salt and Pepa don't bluff
We were the Showstoppers that took your men
We made you shake it then you push it, and we started a trend
But this trend is kinda different, it's not a gold rope
This time it's Salt and Pepa, Spinderella gettin' doper than dope