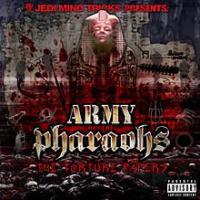 All Shall Perish Letra y Canción

Army of the Pharaohs

[C.Kamachi]
Ain't no need to know my ethno, cause worldwide is where my respect go
My flow is multi-spectral, like I'm space based on LSD in trance state dancing techno
Tellin' y'all haters to let go
It's enough beef but we vegetarian observe the spiritual laws
Purify ya channels and clearly hate ya flaws
So I wouldn't have to convince you that you wack and shouldn't be here at all
Kamachi's this and that I hear it all,
I see you run from ya squad screaming I wasn't even there wit y'all
I start wars with the tongue like it's a lesbian alm
Talk with that Thesbian charm,
And you can let ya stereos amp this
It's the old english, pamphlets of a hoodlum Hamlet
Under literary FBI cameras scanned it daddy
(yah, Ha ha ha ha shit is child's play man)

(Chorus: x2)
Don't let ya life be the aim of pure misery
Don't let this night keep ya frame on floors shivering
This pain and strife can no longer exist to me
Don't be the cause of an unsolved mystery

[King Syze]
I'm an assault author, shockin' volts mixed wid water
Disturbin' the law and order when I'm balling for the future
We them better kids, rap flows throughout my heritage
And let it live you reppin' shit where's the evidence
All I see and hear is poison in my ears
I kill a track, choke slam the snare,
And let the sample live another day
Save it for another chase hunt it down wid my brothers Outerspace
Tried once but my career's built off anger
I'm bout to leave these raps alone and load bangers
It's just the words from a slave rapper
Tryna bring the game back talking to the same master
I'm takin' a stand, my shit expands beyond makin' a band
That talks and storms upon forsaken lands
So when approachin' bring your best shit wit you
When I break it down you can take the rest wit you word

[Vinnie Paz]
Yeh this is bars of death, we merking everybody God is next
Vicious raw literatures pure as Ghandi's flesh
Bomb to the chest, let ya breath cave in
A heart attack to bring the horror back Wes Craven
It make no sense waiting, the team risen
Like Pakistan and India liberated by Britain,
We got rid of dead weight the vision's sharp and cleaner
Like the assassination attempt of Da Cartagena
We like a zombie feature, cause it ain't nothing sweet
And it ain't nobody that's fuc*** wid us on the street
We reinventing the wheel cousin the cycle dead
We push the rock and we bark like we Michael Red
I gave you life instead, gave you rice and bread
I think it's time that I separate the disciple head,
That's probably the only thing that can calm me
Vinnie Pazzienza it's the motherfuckin' Army

Puntuar All Shall Perish

* Agradecemos a Akira_MLL por haber añadido la letra 'All Shall Perish' de Army of the Pharaohs.