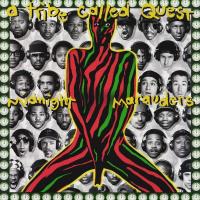 Brothers know the flavs when the Quest gets loose
Slamming sucker fuckers like the wrestler Zeus
Crazier than 2Pac in the flick called Juice
Cock is longer than the hat worn by Dr. Seuss
Love a girl in Daisy Dukes like them kids called Duice
Gets paid to sex the hoochie like my main man Luke
Control the mic like Denzel on the girls
Wack MCs be on the nuts like Rocket J. Squirrel
The worst thing in the world is a sucker MC
Favorite rap group in the world is EPMD
Can't forget the De La, due to originality
And if I ever went solo my favorite MC would be me
Phife Dawg up in the house, I give a shout out to Snoopy
Peace to all the Questers, to hell with the groupies
Like um, Ralph Malph to Potsie, Brooklyn to Dodger
Laverne to Shirley, Rerun to Roger
Ren to the Stimpy, Laurel to Hardy
Q-Tip and Phife, they mash up the party
Kick the rhymes and more rhymes
Kick the beats and more beats
We'll have you scratching in your head like Shaheed on Technics
For those who wanna oppose then take a stand
But for now, just shut your shit and clap your hands

You just wanna dance man, then clap your hands
If you venture up the wrong road, then the circumstance
Will be crucial, I got hundreds of rhymes that'll suit you
So listen

The Abstract intuition is very very worthy
I can feel ya out from Russia to Jersey
Can't understand the underground, it gets deep
The Lo, the Nikes, the links, the jeeps
The women, the lingo, and all the other goods
Peace to the hoods, keep my shit on play
Please don't do the mute when you hear me on the juke
Brothers know the angle, it's the Star-Spangled black banner
Hook up the beats at the funk manor
If you want a roll, then the dough I be raking
The scope is on the world cos it's mine for the taking
You know I'm gonna do it
My shit is rock solid, but it flows like fluid
Chemists get confused of my ill composition
This is the third of the new Tribe addition
MCs be swinging, but a lot of them be missing
So shut your bloodclot and listen
'Cause I'm bringin' you the ill rendition
I'd like to send this out to the L.E.S
Gotta a lot of rhythm and style and finesse
Come here love, hot sex on a plat
And when you're done with that then clap