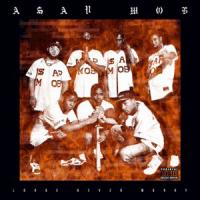 A$AP! Guess who just came up?
From the land of milk and honey, where the thing bust
Spray the Mac-11 'til a ni*** sprang up
And it's snakes in the grass but the bitch ain't cut
That lean and that Tussin be up in my cup
Slanging that drugs, there's no stretching no cut
Four gold chains, same color was the slugs
And a chain with a plate saying, "Don't give a fuck"

I be on that block, be on that stoop
Tryna get cash for the coop
Get cash for the coop, got Da$h in the loop
Might spaz on your troop, cause that's what I do
More fashionable with a bad bitch or two
All of my tools, all of my jewels
Man, I'm awfully cool, all of these dudes
Watching all of our moves, I'm offing these fools

Henny in my cup, half a blunt in my jaws
Said f*** court, now I'm running from the law
Paid the attorney, I give a f*** about the charge
Think the ho's Matlock, way to get a ni*** off
Feeling like Kurt Cobain, black bitch love cocaine
Learn my tricks from the dope game
Young and high die tryna get rich
R. Kelly really think that I can fly in this bitch?

Blow in her nose got crack on the stove
House full of girls, who know my flow
Real-ass ni*** keep the burner in my draws
Pussy-ass niggas get the full clip y'all
Rich-ass ni*** house got eight dogs
Two times four broads, that's eight broads
Fly young ni*** with the Black Scale on
She loving my music, she singing my songs

Bang 'em, get Halle Berry when I spray 'em
Dump 'em in the garbage, I would "Losing Issiah" 'em
Ah, damn, Young Fergy turn into a satan
Got you laying dead, mothafucka, better say your prayers
AK 'em, brrrr in that dirt you be laying
Mama gon' be crying, won't you hear that preacher singing
He be singing like, "Welcome to the crossroads"
Bang 'em, pull the trigger, middle finger when you hear them shots spraying

Just bought new shoes, that's Prada
New crib out in Cali smoking maui
With my niggas, like I oughta, A$AP 'member that
Now my niggas 'bout to blow, like propane
Yeah, I talk about Raf like I talk about rap
But it's only cause I'm flossing, take it up another notch
See they like our sound, it's so amazing
They say it costs to be the boss
We done earned our spot, y'all niggas tryna take it
Jock a little bit of steez from the set
But it's cool, probably thought I wouldn't say shit
It's a recession in the hood, I ain't going back home
Every dollar, I'mma make it
Won't stop 'til we ball like the Lakers, bitch