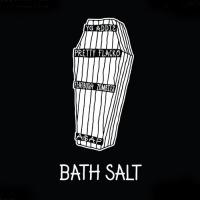 The highest high, I'm Ayatollah
Rubber on my dick, allergic to baby strollers
Blue dream, that amazing odor
Ant is a Pyrex, I'm the coke and the baking soda
Juice be the blue flame that create the whole thing
Rap game, crack game, apparently the same thing
If this was eighty-something, I'd be in shell toes
Gucci-link fat rings, ashy ass elbows
Saving every penny trying to get up out this hellhole
For my super thugs, hustling up off the jail phone
Life's a battle, fool, you better have your weapon drawn
How could I be scared of death, bitch, I'm already gone
Money on my mind, your bitch on my zipper
Breaking up pound after pound, THC on every finger
You gon' need a boost from God to get as high as me, ni***
Excuse me, I meant to say as high as we, ni***

Flatbush Zombie, A$AP Mobbing
Hit a killswitch and put an end to any problem

Hash and weed, hash in a bong
Got weed by the ton, got blow by the load
If you wanna get throwed, A$AP Ant got the potion
Three fly ass bitches with we
Double-cupped them double Ds
Hi-high ni***, hi-high living
Three young ass niggas running shit, no slipping
Gotta know the game, gotta know the lane
Gotta know the pain, no handouts, ain't shit easy
Dark shades on my Eazy-E, got bitches on my mini-me
And you niggas in the rap game, can't relate
I'm real pimping, no fornicating
F*** what you heard, I'm going ape
Smoking Grape Ape, f*** your mixtape
That's a weed plate, Zombie-style
A$AP, never mind these clowns
I love brain, Zombie-style, never mind these clouds

Juice, pass me the weed, Meech, where the acid at?
A$AP Ant in this bitch, uh

[Verse 3: A$AP Ant]
I'm a demon, triple-beaming, painting pictures
Raping Mona Lisa, blood sheets, creeping for the panties
With the collar dannys, killing bitches, sniffing panties
Willy Wonka candy semen, three niggas, one bitch, one clip
One brain-dead girl off your mind, leave your brains on your moms
Razor blades dipped in bleach, tear your skin to pieces
Dump the body in Tennessee, highway getaway, OJ bronco
Cap it, baby, drive 'em off the bridge, look into my eyes, vivid tears
I see fear, y'all some fuc*** queers
Grow a fuc*** pair, I'm 'posed to be here
'Posed to be dead, overdosed on shrooms
Let's cruise, drive by on-site
Ride like a bike, for my Zombie homies kill tonight

A$AP niggas, we aliens, cold-blooded ni***, reptilian
Acid, acid, Ambiens, only f*** a bitch if she lesbian
Trill niggas run the city, got the key on lock
Juice got the juice, ni*** Meech gon' pop
Addie in the Caddy with the heat on cock
When a Mac go brrra cause the beef don't stop, ni***
My name is that pretty motherfuc***
From the land of the lost of the gully and the gutta
See the Preds made a toast for the honey and the butter
Only die for two things, that's my money and my mother, motherfuc***
Niggas know my name, did I stutter?
Niggas know me, man, I keep it one hunna
I'm a stunna, Hood by Air for the summer
Toast to the God and it cost nine hunna
So-so ru-run up if you wanna
Mac in the backpack, right by the Macbook
And I rep that Harlem
And my Zombie niggas straight out of Flatbush