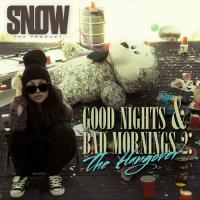 Hold You Down Letra

Man, I never been too into public signs of affection, my biz is my biz
And plus sometimes your private confessions get critisized quick
But I be the type that keeps it in check
And I don't feel the need to reflect
With no fuckin' people except exactly who I'm with
Man I know we straight, we'll be okay
I don't got no stress, I'm getting paid
You know we stay cashing these checks
Man, all that extra shit for the birds
All of them chicks having things to worry bout
A bunch of he said, she said, he said, we said
Oh no, f*** word of mouth
It ain't nothing to keep shit cool if everything between me and you
Don't gotta be publicized because otherwise these bitches start to intrude
Hoes be loving to f*** with a girl's man
It be making 'em feel accomplished
Flirt till he flirt back, somehow that's a ho subconscious
But it ain't never been bout the world, this is about just me and you
You don't gotta say you love me, you just gotta show and prove
I said it ain't never been bout the world, this is about just me and you
Cause good things don't need overselling, everyone know what the f*** it do

Snow can you answer this?
Was that your dude you was in Atlanta with?
Cause I always wanted me a Hispanic chick I can speak some Spanish with
From Los Angeles even though I can barely understand the shit
We got the same management, I might as well take advantage, shit!
Candles lit, what you think about me and you vanishin'?
Cruise on the Pacific since you already on Atlantic 'n
Some booze and we can kick it
Don't worry bout your man 'n shit
Breaking up is natural: Even the Grand Canyon split!
Girl, so come and smoke some cannabis
I'd rather spend this money on you than to give it to some dancer bitch
And I am not a trick, let's just say I'm a philanthropist
It's pimping over here, baby, church - Evangelist
What you think about being my fiancé?
My Beyonce, don't worry bout what them peons say
Let's fly to Paris and get your wedding dress from Givenchy
French kissing at the altar, parlez-vous Francais?

Valorar 'Hold You Down'