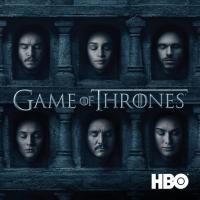 'Battle of the Bastards (Script)'

The Masters' men are launching flaming projectiles at the Great Pyramid and surrounding city from their ships. DAENERYS watches from atop a balcony of the Great Pyramid. She returns to the interior, to the conference room where TYRION awaits. DAENERYS approaches him. An explosion occurs outside.

TYRION: Despite appearances, I think you'll find the city's on the rise.

TYRION: Perhaps we should take shelter.

DAENERYS: The city is on the rise?

TYRION: Meereen is strong. Commerce has returned to the markets. The people are behind you.

TYRION: ...it proves that no one needs a Master.

DAENERYS: Good. Shall we begin?

TYRION: Do we have a plan?

DAENERYS: I will crucify the Masters. I will set their fleets afire, kill every last one of their soldiers, and return their cities to the dirt. That is my plan.

TYRION tightens his jaw and looks away.

TYRION: You once told me you knew what your father was. Did you know his plans for King's Landing when the Lannister armies were at his gates?

TYRION: Probably not. Well, he told my brother and Jaime told me. He had caches of wildfire hidden under the Red Keep, the Guildhalls, the Sept of Baelor, all the major thoroughfares. He would have burned every one of his citizens. The loyal ones and the trators. Every man, woman, and child. That's why Jaime killed him.

DAENERYS: This is entirely different.

TYRION: You're talking about destroying cities. It's not entirely different. I'd like to suggest an alternate approach.

A blast causes the window across the room to explode inward, sending shards of wood flying everywhere. DAENERYS and TYRION duck, then turn to look at the window.

DAENERYS, TYRION, GREY WORM, MISSANDEI, and an assembly of Unsullied stand across from the three Masters, YEZZAN ZO QAGGAZ, RAZDAL MO ERAZ, and BELICHO PAENYMION, and a group of their soldiers.

RAZDAL (to DAENERYS): Once before, I offered you peace. If you had not been so arrogant, you could have returned to your homeland with a fleet of ships. Instead, you will flee Slaver's Bay on foot like the beggar queen you are.

TYRION: We are here to discuss terms of surrender, not to trade insults.

DAENERYS: We obviously didn't communicate clearly. We're here to discuss your surrender, not mine.

RAZDAL: I imagine it's difficult adjust to the new reality. Your reign is over.

DAENERYS: My reign has just begun.

A dragon screeches in the distance. YEZZAN turns to look in the direction of the screech. DROGON flies up over the plateau and lands on an overlooking structure. He roars and drops down beside DAENERYS. DAENERYS climbs on his back and they fly off over Meereen. When they pass over the entrance to the catacombs, RHAEGAL and VISERION bust down the door with flame and take flight to join them. The ensemble flies over the beach entrance to Meereen.

DAENERYS and the dragons fly over the Masters' ships. The soldiers on the ships stop what they're doing and stare up at the dragons. DAENERYS and DROGON come to a halt and hover in front of one of the ships.

The dragons shoot stream of fire down at the the ship. The ship becomes engulfed in flame and the soldiers scream as they die. The ship incinerates and capsizes.

GREY WORM (speaking Valyrian): You men have a choice:

A dragon screeches in the distance. The Masters' soldiers lay down their arms and run away.

TYRION: Thank you for the armada. Our queen does love ships. Now, last time we spoke, we made a pact. You violated that pact. You declared war upon us. Though our queen does have a forgiving nature, this cannot be forgiven.

MISSANDEI: Our queen insists that one of you must die as punishment for your crimes.

TYRION: It always seems a bit abstract, doesn't it, other people dying?

RAZDAL: Him. He should die.

RAZDAL: He's not one of us. He's an outsider, a lowborn. He does not speak for us.

GREY WORM approaches the YEZZAN and stares in his eyes.

TYRION: Tell your people what happened here. Tell them you live by the grace of Her Majesty. When they come forward with notions of retribution or ideas about returning the slave cities to their former glory, remind the what happened when Daenerys Stormborn and her dragons came to Meereen.

TYRION pats YEZZAN on the shoulder. He, GREY WORM, and MISSANDEI walk away.

Puntuar Battle of the Bastards (Script)