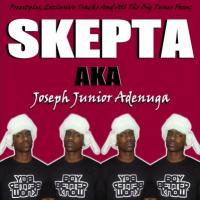 Skepta
Yo, it's Skepta
Yeah
The levels have blatently gone up now
Serious
I've come off the decks onto the mic, man this is what's happening (Wasteman!)
It's not even a joke out here (What?)
It's Masterbeats time
Roll Deep time, Meridian time
Big up Bossman every single day
Yeah?
Okay, Skepta on the mic right now (Big up Bossman)
Listen and learn
Yo!

Go on then, go on then, draw for the 'chete
Bullets start dropping down like confetti
Won't bring a strap if the beef is petty
No family, I just draw for the 'chete
Make you really look like a bowl of spaghetti
Leave your lips bust and your forehead sweaty
I'll make you wish you never drawed the machete
Go on then, think you're ready? Go on then
Know yourself when you're not in the booth
When I touch mic, I only speak truth
Run when you hear the dogs go 'Woof, Woof'
Don't care if he's a 12 year old youth
Go on then, go on then, jump on the roof
When it come down, your head will get hoof
Blud, you will be missing more than one tooth
Skepta, live in the flesh I'm proof

That DJ's can take an MC's title
Get chopped in your top lip with a vinyl
Jack an MC for the R1 cycle
Man get shook on Skepta's arrival
Go on then, Go on then, draw for the rifle
I'll bun a mic man like
Fire man's head like Pepsi did Michael
I will seperate the groom from the bridal
Listen and learn, it's my turn
I'll be a big MC by end of school term
I'm a big bird, you're just a worm
You don't wanna receive third degree burns
When I bust gun, everyone spread like germs
Bullets will run forehead like a perm
Fuck jailhouse, I don't wanna go there
Big boy solicitor, case is adjourned

[?] told me that I ain't got bars
Got better bars than your favorite stars
See man saying go on then in cars
Rudeboy, I got bars
I make Nigerians proud of their facial scars
My bars make you push up your tits like bras
Your bars could never test my bars
Old bars, new bars, [?] war bars
I ain't one of those boys from the past who ain't got the answer
I got the answer
I'm like Mr. Miyagi the master
Go on then, give me the test and I'll pass that exam with my eyes closed, get an A**
When it comes to guns, I draw faster
Push back wig like a wasteman barber
But forget that, Skepta's smarter