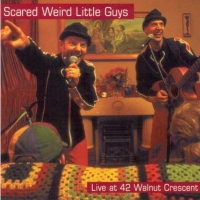 Gst
by the scared weird little guys
Once upon a time in the act
two 'poli's met for a cup of tea
their names were howard, j., and costello, p.,
They talked about the state of the land
how not enough money went into their hands
and they came up with an ingenious plan
to partly bamboozle the common man
and it'd sound good enoughbut it'd still be a scam
and wham, bam, thank you ma'am:
The gst
Let's explain this ten-percent
because confusion is evident
at times like these where every cent
is spent on rent and isn't meant
to supplement the government
and now we feel embarrassment
when he tells us we shouldn't worry
and he can't even say he's sorry
You pay ten-percent on an orange-juicer
which the vender pays to his producer
who hands some on to his supplier
who gets some more from another buyer
That's how it works, it's plain to see
it's simple just like a,b,c
unless you see your juice to me
in which case the gst
is not paid by you, but me
So when you go to the milkbar later
and you buy some bread and a baked potato
the guy's out back with his calculator
and he's trying to see if it's lessor or greater
He's punching away at the keys in front
performing a mathematical stunt
and his language could be described as blunt
as he calls john howard a little...late for dinner
Noodles, videos, plumbers and ice-cream
dog-bones, petrol, feminine hygiene
crampons, custard, concrete
all gets taxed
Say it's ten-percent on forty-eight fifty
or four-eighty-five, but now it gets shifty
'cause now the price becomes fifty-three thirty-five
now round that up to a straight fifty-five
or an extra one-dollar sixty-five
that's thirty-four-percent
on your ten-percent
on top of the tax
you've already spent about three-percent
that wasn't even meant
of the hundred percent
but don't lament
You could send complaints on letters and faxes
but who benefits from all of this?
the person who does your taxes