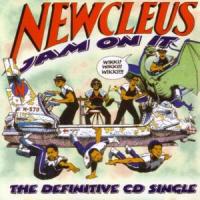 Jam On It Letra

There's going to sound
They're going to get down

Allow me to introduce myself, my name is Chilly be\t
And I'm a surefire, full blooded bonafide house rockin' Jam-On Production MC
If you want the best, put me to the test, and I'm sure you'll soon agree
That I got no force ?cause I'm down by law when it comes to rockin' viciously, you see
?Cause when I was a little baby boy my mama gave me a brand new toy
Two turntables with a mic, and I learned to rock like Dolymite
Time went by, on this God creation, I knew someday I would rock the nation
So I made up my mind just what to do and I joined with the Jam On Production Crew
So go crazy, go crazy, don't let your body be lazy
I said don't stop the body rock till your eyesight starts to get hazy
Clean out your ears and you open your eye, if you want to hear the music just come alive
If you don't know how get ready to learn
Cause Cozmo's takin' his turn to burn

Take the see and O and the Z
Then they add M-O and the freaky D
Add a funky beat, and then what do you see
It's Cozmo D, yeah, baby, that's me
I've got the beat that's, oh, so sweet
Without me rockin' it's incomplete
So rock this, y'all, rock that, y'all
Rock on and don't you dare stop
You rock this, rock that, and that's a fact
Cause the Jam On Crew will rock your body right back
Rock a steam locomo ride off the track
And give the whole wide world a funk attack
A to the beat y'all, get down
Let me rock it to the rhythm of the funk sound
From hill to hill, from sea to sea
A when Jam On's rockin' everybody screams (Jam on it)
Jam on it
Jam on and on, on and on it
And if you're feelin' like you want to dance all night
They go on ahead and flaunt it
?Cause jammin' on is what we do best
It's what separates us from the rest
And if you go deep, I'll cruise down for real
Let me tell what happened to the man of steel

(Said Superman had come to town to see who he could rock)
(He blew away every crew he faced until he reached the block)
(His speakers were three stories high with woofers made of steel)
(And when we boys sit outside, he said \"I boom for real\")
He said, I'm faster than a speedin' bullet when I'm on the set
I don't need no fans to cool my amps, I just use my super breath
I could fly three times around the world without missin' a beat
I socialize with X-ray eyes, and ladies think it's sweet
(And then he turned his power on and the ground began to move)
(And all the buildings for miles around were swayin' to the groove)
(And just when he had fooled the crowd and swore he wouldn't fight)
We rocked this bet with a 12 inch cut called Disco Kryptonite
Well, Superman looked up at me, he said, 'You rock so naturally'
I said now that you've learned to deal, let me tell you why I'm so for real
I'm Cozmo D from outer space, I came to rock the human race
I do it right ?cause I can't do it wrong
That's why the whole world is singin' this song

Said don't you hear the sound
Jam On is gettin' down

Valorar 'Jam On It'