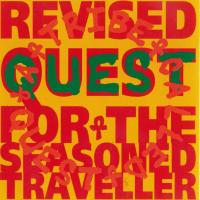 Brother, brother, brother, Lucien, you're like no other
Listen very close 'cause I don't like to boast
Instead, I'll tell the tale of a French who prevailed
Through the Mr. Crazy Rabbits who were always on his tail
We ain't on sale, your rumor starts to wail
Get caught with stolen goods and you will go to jail
If you go to jail, then who will pay the bail?
Deport you back to France on a ship with a sail
Escargot, Lucien, you eat snails
(Hey yo Tip, what's wrong with snails?)
From the Zulu nation, from a town called Paris
Came to America to find liberty
Instead of finding pleasure, all you found was misery
But listen, Lucien, you have a friend in me
Oh, luck-luck will drive your butt batty
Next time you get some wheels, make it a Caddy
In terms of doing good, I know you wish you really could
But listen, brother man, I really think you can
Succeed with the breed of the brothers on your back
It's the creme de la creme, and you can vouch for that
It'll take a minute, rice, so take my advice
Trust in us, and thus you trust in your life
Lucien, Lucien, Lucien, Lucien, you should know!

Are you ready, Lu? This one is for you
Comin' from a true-blue, fits like a shoe
\"¿Cómo está usted?\" or \"Comment allez-vous\"
Lucien, I'll leave it up to you
Voulez-vous? (vous)
Rendez-vous (vous)
Coucou (cou)
Les poupous (pou)
Watch that lass, gonna backlash fast
Can you get a grip on the crackhead dip?
Sold you a paper bag, guess he saw you comin'
VCR from a neck-bone bummin'
Ten dollars brother, he was hummin' and strummin'
Only had twenty, he was livin' like ya slummin'
Gave him the money, well, I thought that was somethin'
Lookin' like a kid who was lost in crumbin'
Don't worry about a thing, I won't get specific
This is a song that is long and prolific
Think of the stuff that I said if you can
Figure it out, compute, understand
No problemo, I'll help you with your demo
If you go to the store for me
Lucien, I'm just kiddin'
You should know

Hey, yo, wassup' man? What's your name?
You have an accent
It's a French accent, you know, I'm French, I'm from Paris, don't you think it's sexy?
No, it's not a sexy accent
Oh, man, give me a try, you try to kiss me enough? Hun? Oh please, what!
Love me French, French me love, everybody love my accent!
Why nobody like it? City of Paris. Why is that? Oh! I'm sexy, and I'm French
Everybody love my accent, I'm the best, yes, yeah!
Je t'aime! I love you! I love you oui, je t'aime!
I'll teach you French, I'll make your French good!

You gotta get a grip on the missions you'll be takin'
Not so much the mission, but you got crazy ignition
Sure, the sugar-babies wanna give you a chance
With the French \"savoir faire\" and the sexy glance
But is she really fly, or is she a guy?
I won't ask why, 'cause I know that you try
You try too hard, is that the answer to the riddle?
Instead of doin' so much, why don't you do just a little?
Boy, what a cad, I guess we shouldn't treat him bad
In fact, it would be nice if we understood him like
A case of positionin' the feet in the shoes
Sympathetic reason in the case of the blues
Lucien is blue, even though he's really brown
I had to make the sound, his life is too profound
On the up-and-up, he's somethin' like a little pup
Young and naive, it's hard to believe
As long as you're strong, you can quest with the Questers
Jolly like a jumping bean or a jester
Lucien, Lucien, Lucien, Lucien
You should know!