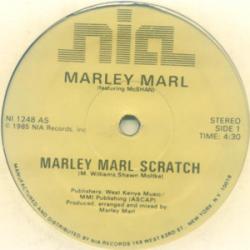 Verse 2
Since you just heard how a DJ sound
The name Marley Marl, I will break it down
The M is for Master of Scratch
And if the needle was to slip it's the needle he'll catch
The A is a letter that you set apart
I wouldn't call his beats music, I would call it Art
The are just stands for the way he Rock
Which is 24-oh-7 around the clock
The L is for Lyrics that I write
When put to his music sounds out of sight
The E is for Every beat he make
Which sucker DJ's persist to take
Don't play with the why 'cause it isn't a game
You ax \"Why do you put the other DJ's to shame?\"
After this there shouldn't be a story to tell
At the end of that is M-A-are-L
This paragraph here has come to a end
Marley, can we hear your funky fresh scratchin' again?

Verse 3
I never got caught in the game of Tag
My name is MC Shan, no need to brag
MC's brag about theirself all through their rhyme
You can see I got quality, won't waste my time
If I did not mean it, I wouldn't have said it
I'm gonna give the man behind the wheels some credit
I'm not tryna say that he can't be beat
But Marley Marl can stand on his own two feet
Since a DJ like him is so in demand
Marley won't you get on and show 'em where you stand

Verse 4
He can go on but I won't insist
How many fortunate MC's have a DJ like this
Every time I grab the mic I always have a plan
He's DJ Marley Marl and I am MC Shan
Combined we're fresh, this you must admit
Don't ever want to hear you say we ain't worth jack
To be a DJ or an MC well it isn't no thing
If you ever want to learn then just give us a ring
Like I just said, it wasn't no thing
You either have to be a ace, a jack, a queen or a king
When you're one of these, that means you're the best
And the people of today won't settle for less
We can be a jack or king, we can play the place
But we'd rather be a DJ and an MC ace

Verse 5
If you ever want to battle, be at your best
Because a man like Marley just does not fess
In that battle you must give your all
Or just be prepared to take your fall
'cause a lotta DJ's already tried
There ain't been one yet that's qualified
To think you can beat him, you must be nuts
Just listen real close to his scratchin' cuts

Verse 6
The man Marley Marl can bring you to tears
He's not a new jack, he been down for years
On the two turntables I would say he's nice
Every cut he makes is so precise
When I said precise inside my rhyme
To put it to you straight that means right on time
Every jam he throws he always rocked
Don't refer to him as the neighbourhood jock
To all you DJ's who are always fessin'
From this man you can learn a lesson
You heard Dimples D when she took her stand
She said (Marley Marl is one hell of a man)
Gotta get it off my chest, to put my mind at ease
Since when you heard a DJ make cuts like these?