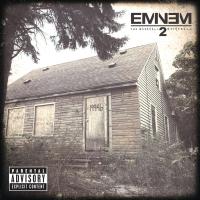 [Verse 1:]
(What's your name?) Marshall
(Who's your daddy?) I don't have one
My mother reproduced like a komodo dragon
And had me on the back of a motorcycle
Then crashed in the side of loco-motive with rap, I'm loco
It's like handing a psycho a loaded handgun
Michelangelo with a paint gun in a tantrum
About to explode all over the canvas
Back with the Yoda of rap in a spasm
(Your music usually has them)
(But waned for the game your enthusiasm it hasn't)
(Follow you must, Rick Rubin my little Padawan)
A Jedi in training, colossal brain and, thoughts of entertaining
But docile and impossible to explain and, I'm also vain and
Probably find a way to complain about a Picasso painting
Puke Skywalker, but sound like Chewbacca when I talk
Full of such blind rage I need a seeing eye dog
Can't even find the page, I was writing this rhyme on, (oh..)
Its on a rampage, couldn't see what I wrote I write small
(It says) Ever since I drove a 79 Lincoln with white walls
Had a fire in my heart, and a dire desire to aspire, to DIE HARD
So as long as I'm on the clock punching this time card
Hip hop ain't dying on my watch

[Hook:]
But sometimes, when I’m sleeping, she comes to me in my dreams
Is she taken? Is she mine? Don’t got, I don’t care, don’t have two shits to give
Let me take you by the hand, to promise land, and threaten everyone
Cause there’s no rhyme or no reason for nothing

[Verse 2:]
If he had, he wouldn’t have ended up in these rhymes on my pad
I wouldn’t be so mad, my attitude wouldn’t be so bad, yeah, dad
I'm the epitome and the prime example of what happens
When the power of the rhyme falls into the wrong hands, and
Makes you want to get up and start dancing
Even if it is Charles Manson who just happens, to be rapping
Blue lights flashing, laughing all the way to the bank
Lamping in my K-Mart mansion, I’m in the style department
With a pile in my car, ripping the aisle apart
With great power comes absolutely no responsiblity, for content
Completely, despondent, and condescending
The king of nonsense and controversy is on, a
Beat killing spree, your honor, I must, plea
Guilty, cause I sparked a, revolution
Rebel without a cause, who caused the evolution of rap
To take it to the next level, boost it
But several rebuked it, and whoever produced it
(Hip hop is the devil's music) Is that me? It belongs to me?
Cuz I just happen to be, a white honky devil with two horns
That don't honk but every time I speak you, hear a beep?
But lyrically I never hear a peep, not even a whisper
Rappers better stay clear of me, bitch
Cause it's the…

[Verse 3:]
So yeah dad let's walk
Let's have us a father and son talk
But I bet we probably wouldn't get one block
Without me knocking your block off
This is all your fault
Maybe that's why I'm always so bananas
I appeal to all those walks of like
Whoever had strife
Maybe that's what dad and son talks are like
Cause I related to the struggles of Young America
When their fuc*** parents were unaware of their troubles
Now they're ripping out their fuc*** hair again
It's a stare ruckle, I chuckle
Cause everybody bloodies their bare knuckles
Yeah, uh oh, better beware knuckleheads
The sound of my hustle says don't knock
The doors broken it won't lock
It might just fly open, get cold cocked
You critics come pay to me a visit
Misery loves company, please stay a minute
Kryptonite to a hypocrite
Zip your lip if you dish it but can't take it
Too busy getting stoned in your glass house
To kick rocks, and you wonder why I lash out
Mister Mathers as advertised on the flyers
Spread the word cause I'm promoting my passion till I'm passed out
A completely brain dead Rainman
Doing a bankhead in a restraint chair
So bitch, if you shoot me a look it better be a blank stare
Or get shanked in the pancreas, I'm angrier than
All 8 of the reindeer put together with Chief Keef
Cause I hate every fuc*** thing, yeah
Even this rhyme bitch, and quit tryna look
For a fuc*** reason for it that ain't there
But I still am a CRIMINAL
Ten year old degenerate grabbing on my GENITALS
The last Mathers LP that went diamond
This time I'm predicting this one will go EMERALD
When will the madness end, how can it when
There's no method the pad and pen
The only message that I have to say is:
Dad, I'm back at it again
Bitch