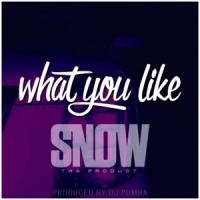 Might've overdone it with the liquor
What do you expect from the girl from "Drunk Love"?
I'm bad at relationships, I play 'till it's too late
And I hit you with the "Wassup?"
Same shit - you f*** up, I get fuc*** up
Then your number get clocked and I run up
My pedestal, cause you been this full
Of shit, since the day I met you when I was young
And I used to fall for your stuff
But now I'm grown enough to know - f*** trust
I just really have to hit you when I'm buzzed up
Numb the feeling and deal with the rush of
Just hitting you up, picking you up
You leave your car and you'll get in my truck
We get away for a week and a month
Then drop you off like I don't give a f***
But I say that, say that, say that, say that
Love it how you don't take that, take that, take that, take that, take that
Look I've been hella tired of this drama on the low
But if you free tonight, I got a spot that we can go

Comenta o pregunta lo que desees sobre 'What You Like'