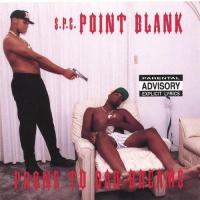 I hate the whole fuc*** world so the world better hate me
I bust in your house and kill your whole fuc*** family
I get so much pussy i think fuc*** is boring
Took 10 mothafuckas to the grave up north
They couldn't handle me enough so what you gonna do with me?
Lock me up? punk i broke out of two penitentiaries
Join the gang ain't no thang i love competition
Shot my brotha in the head cause my hand was itching
Never liked my stepdad cause he was too phony
Stuck his arm up his ass cause he tried to swing on me
I killed 2 of my teachers cause they called me a dummy
Yo, ask me why i don't smile cause i don't think shit funny
I don't joke, bitch, nor do i clown
You can tell i was from houston from the bodies i left around
Now you can take that shit to the bank
And tell all the fuc*** people that's why they call me point blank...

When i go off people say they never saw shit
And close their ears cause i only kick the raw shit
You said you was hard so i started to busting the rough shit
Now you wanna cry, you must not be from south park, bitch
A lot of niggas wanna rush blank on a bum tip
But that's a dumb tip
See, i only been threaten by one man in my life
And i promised never to look in the mirror with a butcher-knife
Shock cause my lyrics are browsing
Suckers i battled last year still standing with their mouths open
Hoping they could come a plea but not from me
Cause i'm solid as a bar that's slamming t.d.c.
A lot of niggas say they are harder than concrete but still get bin
Bitch, i punch holes in cement
I can't belive you played yourself
Trying to get a rid of me, you know you out-rated yourself
You better go to sleep and forget the past
Cause i'ma f*** around and wreck your ass
Bitch...

Point blank, the hardest mothafucka around
A lot of niggas tried to cross my waters but got drowned
See, i think compared to me
Other artists and new mothafuckas' scared to get with me
But i met a couple, their nuts was swollen
And they still try to get my shoes out their assholes
Never would blank get rolled on
I got suckers on life-support still trying to hold on
I tried to give them a break, let them stay awake
But now i see i made a mistake
Cause the pussy mothafuckas' claiming they bad and shit
Now they sleep forever in a casket
Never underestimate the mind of a psycho
Harder than a mothafucka, people say i might go...crazy
But i'm not, i'm slicker than a fox
Stomach made of steel, drink piss on the rocks
On the level i'm straight, crowds i motivate
Penetrate bitches with my trusty old .38
So don't ever try to step to me wrong
Cause when my blood rush i cut more people than king kong
Police on my ass cause i terrorize the city
Doctors love me for keeping the hospitals busy
Social security is a punch of bull
I get a check every month for keeping graveyards full
So if you ever need a nigga that's insane
Look me up, point blank's my mothafucking name...