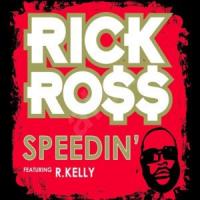 [Verse 1: Rick Ross]
Every dollar that I count can't grow in my account
My account can't count up all my money in an hour
Cause it's comin too fast and I'm scared it won't last
Look that white girl in her face told her this was her last dance
GOD DAMN speed got my heart racin
See I don't have the nominations you can blame it on my occupation
Ceasar salad, Caesars Palace
You not a boss little ni*** cause your cheese is average
In the Benz ak ridin shotgun
It's a Benz cause your broke 'til you got one
It ain't nothing do 100 in the maybach
Throwin money out the roof motherfuc*** brake pads

[Chorus]
Fast life, I live, big cars, big cribs, speedin
I'm speedin, I can't stop it's all I know
From a youngin I was taught get doe
I'm speedin, speedin, I'm speedin

[Verse 2]
See people came lookin for me I got ghosts see the west coast
close and up in the lamontrose
Big money boss major
American idol, I got fans like fantasia
Read between the lines or yo ass like fantasia
Get hit between the eyes he died they can't save him
I'm a mosh I'm weevin no no but I'm speedin
Staring at the skyline I got a million on my mind I'm the best
and these pu*** niggas running out of time Ricky Ross
I'm the chill quarter mill for the time piece
Ya I a bought a wheels like deals for the dime piece

We fly I think somebody followin we hear the helipad with ya bitch
You worth fifteen million baby don't try to blow it all in one week
Overseas boss (I'm speedin I'm speedin)
I'm a fly away on you haters
And I came up so fast movies, endorsements, films...
We own things... boss boss boss