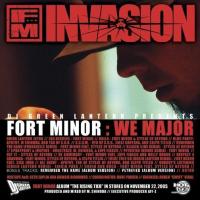 Hey Ap, why don't you do the uh?the intro on this shit?
Yo Apathy, Fort Minor, Styles Of Beyond, Demigodz

Yo, Ap is like heavy metal and ghettos
Guns, metals and ammo
I pistol whip Tony and f*** Meadows Soprano
A cat who sells them bugs but tell them thugs

Ap is like heavy metal and ghettos
Guns, metals and ammo
I pistol whip Tony and f*** Meadows Soprano
A cat who sells them bugs but tell them thugs
They don't know how to carry more heat than welding gloves
I walk amongst the gods, keep my head in the clouds
Oh we show groupies love, getting head in the crowds
Put it in girls mouth blast off like NASA
The master of nastiness transform a classy bitch into
A little sheen freak sadomasochist
Dastardly bastard of rap so disastorous
Spitting, healed a cripple like Christ the miraculous
And fights my savageness, turns punks, pacifists
The police clock Ap like there he go
Always on the watch because I use to carry blow
Always lock her down but I never marry ho's
Barry foes when the flows comes through your stereo

There we go flipping unpredictable verses
It's a curse to burst words like torrets on purpose
Put the verb like a backhand reject perverse as it is
I can't stop and its making me nervous, ok?
Get me on a track and I'm cracking
Packing up a backpack full of tracks on some CDs
Be me, f*** that and not like me
To bite me you need to be you times ninety
I got schemes and a team so hyped we
Get on a scene make a scene on the nightly
Say what I mean, whether mean or politely
Living the dream in some clean white Nike's
Or DC's I'm not giving a shit
F*** the words that you heard and the lips that they hang from
I stay banging to bang, bang drums and hanging you lames
And the same no names gangs you came from
I don't got an excuse just talking the truth
I'm fuc*** awesome when I'm rocking the booth
And I stay ready with hot bloc rocking abuse
Y'all are really not stopping us dude yeah Tak get 'em

It started off get on over and hit the galaxy
Now we are movuing them over they are crowing me the Cali king
Anything tossed on my fuse getting chewed up
With a quota six and little good weight too much
Going to get smacked in the face with aluminum bats
Your fuc*** raps as good as me, Bobo and
I said I was rude, step in the shoes, you don't believe me
You can ask Devin the dude how I strip down the
bitch clown stand in my socks
Whip the mother fuck*** ass like I'm Cannibal watch
You want to be stoned? Even with a basket of ice
Get your shit flowing feeling for the casket to drop
You know them S.O.B.'s never get the record to stop
Breaking the habit is impossible what happened to Tak
He's unleashed he's a beast so Sledge hand me a bloc
Party whats your corpses posing for the camera was shot huh
Styles and Machine Shop, necklace fly
No wonder everyone is so petrified
I said, Styles and Machine Shop, necklace fly
No wonder everyone is so petrified

Let me hear that!